* In case of any delay in receiving the OTP, you may verify it later. Please proceed without verification.

Enter your City name or Pincode

The town of Garhshankar is a municipal council in the Hoshiarpur district of Punjab. This town is believed to be founded by King Shankar Sahai who belonged to Doad dynasty. That’s how the name of the town was derived. Gargh which means 'home' in Hindi and Shankar the name of the King. So, literally, the name Garhshankar means "home of Shankar". The city was founded by the king in the 1000.AD. Garhshankar was a tehsil between the periods of 1849–1947 under the British rule. Under the rule of King Shankar, this region was ruled as one from the headquarters Garhi Mansowal. Today, the families belonging to the Doad clan live in the upscale locality of the town-Block 22. In the earlier days these places were called as Beets. 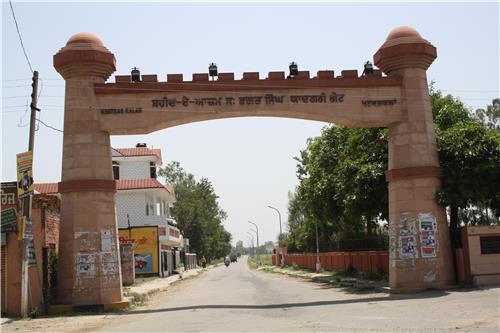 When Maharaja Ranjit Singh was plotting to conquer the sub-mountainous region of Kandi the Doads of Mansowal helped him by sending fifteen horse riders to accomplish his task. In return, the Maharaja granted the Doads lands of Mansowal as gift of gratitude. The British Empire also gifted the Doads property of eight villages. In the year 1775 the Doad King was killed when the Rana of the Ghorewahas conquered Garhshankar. During the unfortunate incident of slaughter of Doads at Garhshankar, five grandsons of the last King were not killed. The wife of youngest Doad king who was also killed in the attack survived as she was away in Ajnoha at her parents’ home. At that time she was expecting her child and soon after delivered a son. Raja Bhinsi who was the descendent of Hawaha and also the King of Ghorewaha defeated the family of Doad and took over Garhshankar. Rai Roopchand Singh who was the grandson of Raja Bhinsi converted to Islam religion in 1605. He changed his name to Rai Abid Khan. After his death in the year 1937, Sardar Bahadur S.M Niaz Ahmed Khan constructed his tomb (mazzar). It is believed that after partition, Rai Roopchandmigrated to Pakistan and lived in different places that include, Faislabad, Montgomery, Arifwala and Lahore. District Government of Hoshiarpur took the responsibility of maintaining the mazzar and appointed Mr. Suddam as the caretaker. After his death, his son his son,Ripu Suddam Sharma took over the responsibility.

To ensure continuous flow of currency various leading banks have set up their branches all across Garhshankar. Apart from normal banking facilities like opening accounts, preparing demand drafts they also have locker facilities to offer. Visit them to save your hard earned money.

Comments / Discussion Board - About Garhshankar